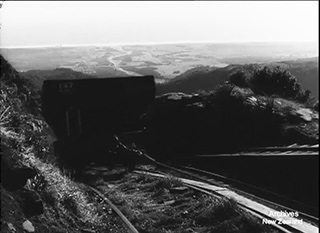 A new decade, another new venture in film... in 1990 Hugh formed the Memory Line Productions partnership with two former colleagues from the National Film Unit, Kit Rollings and David Sims. They wanted to do full length documentaries on subjects they had touched on while working for the NFU. They were most interested in the rich social and economic history of the nineteenth century settlers who depended on various forms of rail technology to make their living.

Their first Memory Line film, Rimutaka Incline (1992) focussed on a unique railway engine, the Fell locomotive, which between 1878 and 1955 was the key to hauling trains of goods and people through and over the steep Rimutaka Range in south Wairarapa. The film combines interviews with those who worked on the engines, footage of the world's only remaining Fell loco (restored and the jewel of the Fell Engine Museum  [ http://www.fellmuseum.org.nz/]  in Featherston), and archive footage never seen publicly before then of a train on the incline working with up to six engines.

The same combination of contemporary interviews and historical footage was used for the other Memory Line films. The next one was On Denniston (1993). Returning to a subject which fascinated Hugh ever since he made After Ninety Years for the NFU in 1967, On Denniston uses footage from that film of the Denniston Incline in action, shot the year before it closed for good. It also gives a much fuller picture of what life was like on the Denniston plateau when 4,000 people lived and worked there – especially for the women raising children in a harsh mountain environment while worrying about their husbands working at a dangerous occupation in the mines or on the incline.

Memory Line Productions made seven films during the 1990s – read more about them (and purchase them) here. The only films ever made about the unique subjects they cover, they continue to sell steadily from the website and from selected museums.

A humorous short film on a new invention - a water-saving scraper for removing effluent from milking sheds and yards - Forest Gupping and the Supa-Scraper (1996) was written, directed and produced by Hugh for exhibition on the Supa-Scraper stand at the 1996 Mystery Creek Field Days. It picked up three awards from ITVA (NZ) in 1996 - Silver Monitor, Best Script and Best Sound (for Kit Rollings).

In 1996 Hugh returned to producing another animated film with his former NFU colleague Bob Stenhouse. The Orchard (1996)  is based on a Japanese fable in which an old man is the only one who knows that a tsunami could be coming after an earthquake that his fellow villagers survive unharmed. Selected for screening at the NZ International Film Festivals in 1996, The Orchard was also short-listed for an Academy Award Nomination (Best Animated Short Film) in 1997.

Hugh and Bob continued to work together on animating stories and doing technical animations, including a 1998 animated version of Joy Cowley's story The Mouse Bride for television.

Hugh continued to make promotional films for Kiwi Co-operative Dairies until 2000. Kiwi – Dairy Giant (1998) won the Silver Monitor and Best Sound at the ITVA (NZ) Video Awards in 1998. In the same year, Kiwi built Dairyland, a combination restaurant, museum and general showpiece for the Taranaki dairy industry. Local artist and owner of the Tawhiti Museum, [http://www.tawhitimuseum.co.nz/] Nigel Ogle, designed and built the museum displays and also devised The Tanker Ride. Hugh was engaged to create the film component of what is regarded as the  first museum ride experience ever made in New Zealand.

For The Tanker Ride (1998) the audience sat on a moving platform (driven by a giant cam underneath and synchronized to the picture by computer) facing a life-size marionette of a tanker driver. He moved and spoke to the audience as he took them on an 8 minute filmed journey of his farm collection run from the Kiwi Dairies site and back again. A very wide screen video image simulated the view through the windscreen while the sounds of the journey came from 4-track Dolby Surround Sound with the front centre track carrying the voice of the tanker driver. The Tanker Ride was hugely popular, but it was mothballed when Kiwi Dairies ceased to exist after becoming part of Fonterra in 2001.